The Age of the Chosen Generation on the Day of Deuteronomy

The age group of the generation to whom the LORD appeals in Deuteronomy is vitally connected to the message being delivered. Perhaps, if you have been following our study, you too have been awestruck with wonder at the language of love employed by divine wisdom in this timely moment of decisive healing. With a penetrating language that reaches to the heart and heals the maladies of faith on full display in this Book, one ought to wonder what core doctrines of the faith were opened up and newly realized to bring about perseverance. If faith affects the heart, and the heart affects the spiritual eyes and ears of Israel, one ought to wonder what new sights and sounds were beheld and comprehended by the people. If faith affects the understanding, and a good spiritual understanding forbids forgetfulness through empowering diligent consideration of mind, one ought to wonder what core doctrines are the subjects of faith in Deuteronomy.

Yonder, in the plains of Moab, the LORD made Israel to see and know things that made the heart better; however, the new things which they were seeing and knowing cannot be understood without the scope of what they were already seeing and knowing. Only then will we, as readers, come to terms with the revitalizing message of Deuteronomy. This is why the age of this generation to whom the LORD is speaking in Deuteronomy will prove to be important. For, however much they had seen or known of the majesty & glory of Jehovah depends upon how old they were.

“Your carcases shall fall in this wilderness; and all that were numbered of you, according to your whole number, from twenty years old and upward, which have murmured against me, Doubtless ye shall not come into the land, concerning which I sware to make you dwell therein, save Caleb the son of Jephunneh, and Joshua the son of Nun. But your little ones, which ye said should be a prey, them will I bring in, and they shall know the land which ye have despised. But as for you, your carcases, they shall fall in this Wilderness. And your Children shall wander in the Wilderness forty years, and bear your whoredoms, until your carcases be wasted in the Wilderness. After the number of the days in which ye searched the land, even forty days, each day for a year, shall ye bear your iniquities, even forty years, and ye shall know my breach of promise.” – Num. 14:29-34

With respect to the judgment of God, the Exodus Generation was made up of the fighting men that came out of Egypt, whose ages ranged from 20 years old and upward (Num. 1:3); the same generation that ultimately perished in the Wilderness for their rebellion in the Day of Battle (Num. 14:29-34, Ps. 78:8-11). Consequentially, according to Numbers 14:29-34, the mantle of responsibility passed to their immediate Children – specifically, those who were alive then, at the Day of Provocation (Ps. 95:8), rather than those who were born thereafter, that it might be fulfilled that they would wander with their Fathers forty years and bear their whoredoms. This would narrow the selection of this choice generation to the space of 19 years, only if one counts the underage years of babes and toddlers (Deut. 1:39; Isa. 7:16). 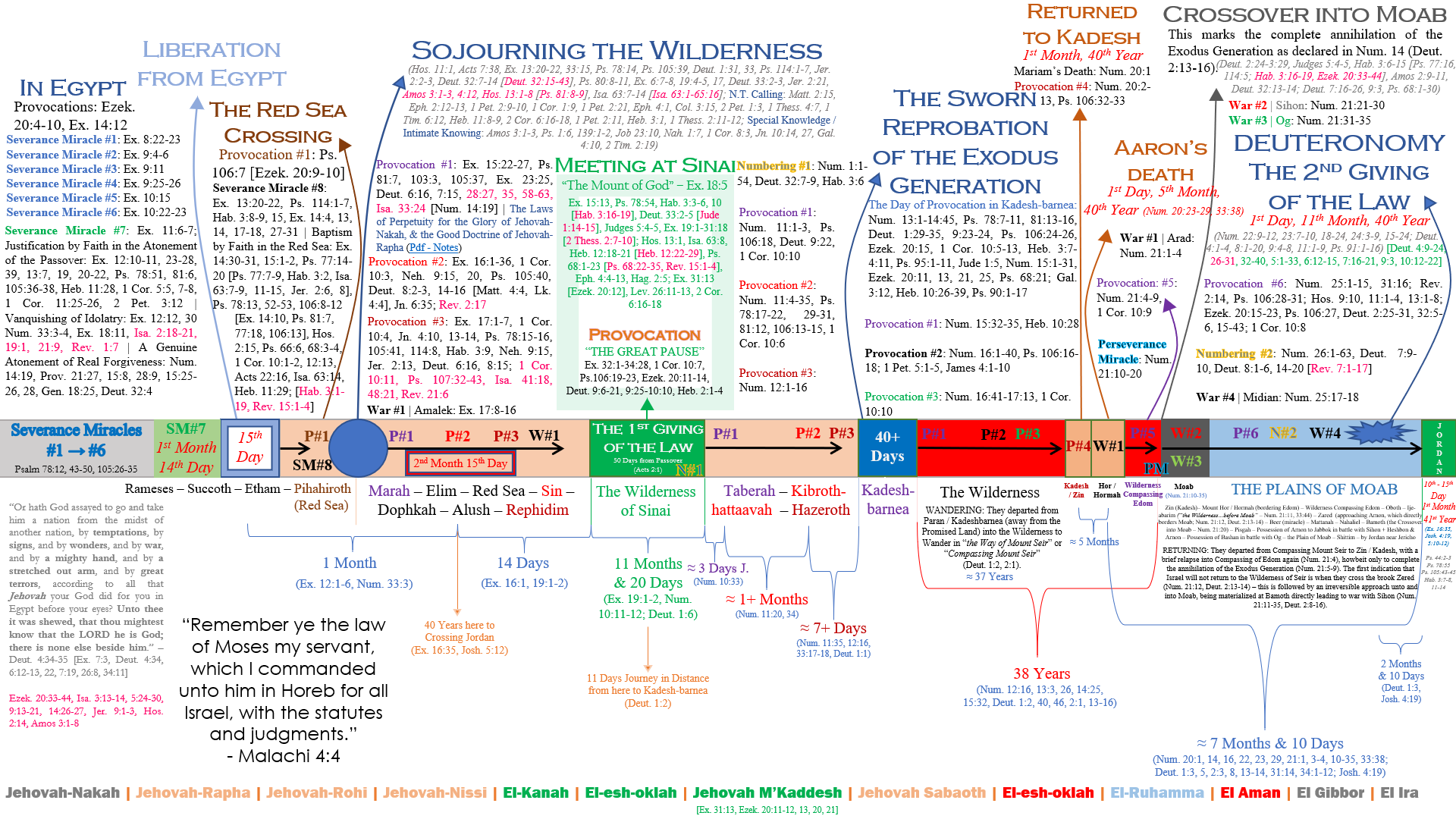 Apparently, God wanted the Children beholden to the punishment of their Fathers: “And your Children shall wander in the Wilderness forty years, and bear your whoredoms, until your carcases be wasted in the Wilderness.” (Num. 14:33). This was a redemptive process (Ps. 90:1-17). Jehovah wanted the Children to look upon the dead carcasses of their Fathers and personally taste the bitterness of whoredom against the LORD, that such wickedness would never again be committed in Israel. However, remember, the provocation at Kadesh-barnea took place around 1 ½ years after Israel’s Exodus from Egypt, and around a couple months after the giving of the Law at Horeb. Certainly, the capacity of knowledge in the Children at Kadesh-barea and thereafter was important to God, but what about the things that happened before Kadesh-barnea?

Depending upon the content of the message being communicated in Deuteronomy, the age group could be reduced to only those Children who were of age to be truly converted during Israel’s Exodus from Egypt. This would potentially limit age of the Children of the Exodus Generation to around 7 to 19 years old, depending when you reckon them up in the 2-year journey leading up to Kadesh-barnea. At age 7, an Israelite Child would certainly have the capacity to be saved by faith in the Exodus alongside their Fathers; and, being 19 years of age or younger by the time Israel numbered the fighting men for war, these Children would have been just short of becoming a part of the fighting men of the Exodus Generation. At this age the Children would have had the awareness and capacity to coherently witness the salvific virtue of all the wonders that took place from Egypt to Kadesh-barnea, in addition to witnessing what happened from Kadesh-barnea to the plains of Moab.

Whether or not the Children of the Exodus Generation were alive to coherently see and understand the Exodus from Egypt would certainly affect how the LORD would speak to them in Deuteronomy. Right? Whether or not they were alive and of age to see and comprehend what was happening at Sinai, at the giving of the Law, or in the shocking events thereafter, would certainly change what Jehovah would say to them in Deuteronomy. Right? For, this would add around 2 years to the repertoire of divine truth that the Children of the Exodus Generation would be accountable to.

This intentional passing of the baton from one generation to the next was duly emphasized in Deuteronomy 5:2-3, because at the death of their Fathers the intention of God originally declared must now be fully engaged. Therefore, in the plains of Moab, Jehovah pointed back to Horeb as if to say that their Fathers had been formally erased from the equation (Ex. 32:30-35, Ezek. 13:9, Rev. 3:5).

“The LORD our God made a Covenant with us in Horeb. The LORD made not this Covenant with our Fathers, but with us, even us, who are all of us here alive this day.” – Deut. 5:2-3

This striking declaration put the Chosen Generation in awe and wonder. For, herein, God was making them “know” the dreadful promise uttered of old at Kadesh-barnea, when the LORD said: “…and ye shall know My breach of promise.” (Num. 13:34). How? God spoke about the Exodus Generation to their Children in Deuteronomy 5:2-3 with such forcible words, renouncing the former and confirming the latter, speaking so matter-of-factly about how the Exodus Generation was blotted out of existence and irrelevant to Horeb; speaking as though the Covenant at Horeb was never originally authored for the Exodus Generation or legitimately possessed by them. It is as Jehovah foretold: “…and ye shall know My breach of promise.” (Num. 13:34).

Even so, what does this say about the Children of the Exodus Generation? Considering the fact that Jehovah’s investment in the Exodus Generation was inestimable in value, what can be said about the next generation? What did they really know about Jehovah on the Day of Deuteronomy? Or, how shall God forbid their delinquency? For, if God couldn’t make the Exodus Generation persevere, how shall He make their Children persevere? Obviously, these questions are important to the storyline of the Law – naturally because the Law was delivered in a biblical narrative that spans these two generations. Therefore, the contrasting significance of these two generations is key to understanding the divine intent of the Law. Hence, the questions. This divine act of replacement begs such questions and more: For, after all, was the Exodus incapable of redeeming? Or, was Horeb insufficient to save? In conclusion, were the wonderous works performed leading up to Kadesh-barnea subpar revelations of Jehovah that inadvertently led to the reprobation of the Exodus Generation, so that something new and improved needed to be revealed in the plains of Moab to the Children of the Exodus Generation?

Deuteronomy provides a vocabulary to assess the vital signs of faith; it provides a science to check the pulse of true religion in the soul of redeemed man.

Forbidding all such misconceptions of this situation, Jehovah opened Deuteronomy by bringing clarity to the demise of their Fathers. Undoubtedly, by the virtue of things revealed from the Exodus to Kadesh-barnea, the Exodus Generation was expected to conquer the Promised Land by faith (Deut. 1:29-34). Their failure to conquer as overcomers was due to their unbelief, not for a want of grace available to believe (Heb. 12:15). They needed a lesson on faith, not something else to believe upon because ofthe insufficiency of former things revealed. They needed to learn a new way to think and pray about their own faith in the Law, as exemplified in Psalm 119:1-8. Inspiring this, Deuteronomy compels believers to look inwardly in godly introspection, making them see the necessity of wholeness & uprightness of heart in respect to faith in God; warning believers against the superficiality of outward religious exercise when sin has hardened the heart, teaching them to fear in such cases lest they are forsaken of God like the Exodus Generation.

“ALEPH. Blessed are the undefiled in the way, who walk in the law of the LORD. Blessed are they that keep his testimonies, and that seek him with the whole heart. They also do no iniquity: they walk in His ways. Thou hast commanded us to keep thy precepts diligently. O that my ways were directed to keep thy statutes! Then shall I not be ashamed, when I have respect unto all thy commandments. I will praise thee with uprightness of heart, when I shall have learned thy righteous judgments. I will keep thy statutes: O forsake me not utterly.” - Psalms 119:1-8

In respect to divine things revealed, the Children of the Exodus Generation were virtually indistinguishable from the truly saved Israelites of the Exodus Generation, except for their age. The choice generation to whom the LORD was speaking in Deuteronomy was alive, of age, and savingly wrought upon in the Exodus from Egypt, in the fiery display of majesty at Horeb, and everything in between leading up to Kadesh-barnea. This is an indisputable fact; one that is abundantly clear in even a casual reading of Deuteronomy, if only the reader would keep in memory that their Fathers were totally annihilated by the time Deuteronomy was given to Israel (Deut. 2:13-16).

“And the space in which we came from Kadeshbarnea, until we were come over the brook Zered, was thirty and eight years; until all the generation of the Men of War were wasted out from among the host, as the LORD sware unto them. For indeed the hand of the LORD was against them, to destroy them from among the host, until they were consumed.” – Deut. 2:14-15

Therefore, when speaking about the Exodus, Jehovah was holding this chosen generation accountable to the salvific exploits they had already experienced theretofore: as Moses said, “according to all that the LORD your God did for you in Egypt before your eyes” (Deut. 4:34). Likewise, in reminding the Children of the Exodus Generation about Horeb, Jehovah was speaking to an audience that had personal knowledge of the shocking display of terrible majesty as eyewitnesses. Therefore, Moses described it as “the things which thine eyes have seen” (Deut. 4:9), at the time when God “showed [them] His great fire” (Deut. 4:36; Song 8:6); or, the things which their ears “heard” (Deut. 4:12), at the time when God made them to “hear His voice” (Deut. 4:36).